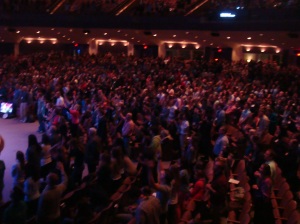 I am back in Guatemala and transitioning to life here.  This is the first time I have transitioned from snow to sun and it was a delight (sorry to my snow blanketed friends).

The conference was definitely a great place for us to start when it comes to finding the equipment that we will need.  Not only was it a place to network, but it also gave a sense of being surrounded by so many like-minded people.  How refreshing!  The first night after seminars and talking all day, we entered the session and joined together singing a song entitled “Oceans” and that’s the picture of what the sanctuary was – an ocean of people all in the same boat.  The atmosphere was abounding with the attitude that we were all there to join together for the sake of the Kingdom.  I was encouraged that all of these ministries were there in support of one another and not in competition with each other.

Who did I meet?  I talked to nurses that have developed schools in other countries.  I talked to doctors and hospital administrators, bio medics and pharmacists that have worked in these countries and wanted to offer their assistance.  Remember James from World Wide Lab?  As I was walking an aisle surrounded by people I heard, “Adrienne!  Adrienne!” and looked to see a man chasing me down.  It was James.  He was there with World Wide Lab and while he was there he was also doing networking on our behalf.  He gave me a card for a guy that wanted to help.  I was to call him after the conference, but I thought if he’s here, it would be much better to talk to him face to face.  And so I stored his name in my brain.  And as I was talking to another man, I saw another card for this man.  I asked, “Do you know where this guy is?”  And sure enough, just around the corner I found the guy.  Connections, connections, connections.

To say the least the week was overwhelming.  At night I felt that I not only got the 15,000 words that my body has the desire to speak a day out…. But I also spoke 65,000 words that I had stored up for weeks!  Generally when I approach someone that I do not now I am shy and struggle to get my words across, but God’s grace was over me and I was able to speak with confidence and purpose.  Building a hospital is not easy.  But it’s not something that needs to be done in isolation.  We are all in this together.  This is the body of Christ working as one.  Thanks for going before and being a part of that puzzle.

This is a board that represented all of those present.  Each marker represents someone at the conference.