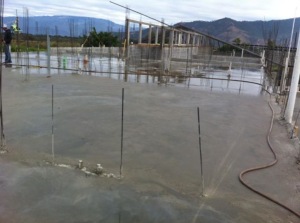 This picture does not encapsulate all that went into this day.  The finished product does not show the 3600 pounds of  sand that was collected from the river, or the 3600 pounds of rock that was collected and then crushed to go into the cement.  It doesn’t show the rebar that was bent and molded and connected together or the forms that had to be placed and supported.  Months of labor went into preparation for this day – without a guarantee that each kink had been worked out.  For the second floor of the hospital, that would serve as a roof over the OR and a floor for the second level, the cement had to be laid in one continual piece.  If one section dried before the next, it would not stick together and it would crumble.  And so, the men prepared everything necessary for the pour that they could ahead of time and began at 2 AM with the mixing of the first load.  They worked non-stop through the day with their team of workers to complete this pour.  And the floor stands as you see it now with 2 inches of water on it to cure for 15 days.

Here is a mix of photos to try and show you what it took for this pour to be completed.  It was another day that God showed His favor over all that is happening here.  A day of unity.  A day of teamwork.  And another step towards opening the doors. 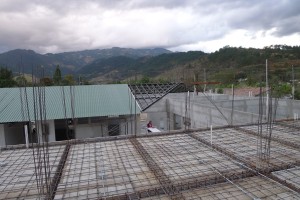 Laying of the rebar and beams and support system that the cement will cover.

Placing the forms and then supporting the weight with boards underneath the entire project.

Placing of plumbing and pipe and wire – anything that would be wanted in the future.

Each piece of rebar was bent and twisted and connected together for strength throughout the whole structure.

Crushing 3600 pounds of rock gathered from the river.

Sifting and washing 3600 pounds of sand to be used in the cement.  Clean sand is a must.

Setting up a lighting system so that they could continue to work until the project was completed.  Here they are in the early morning starting the first pour.

Making sure that each pocket is completely filled with cement. 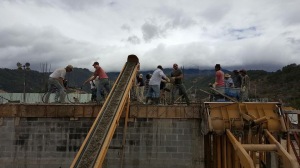 Two conveyer systems sent cement up to the roof where it fell into a wheel barrow and was taken to the area of the roof that the team was working on.  The men formed an assembly line to complete this process and truly worked as a team. 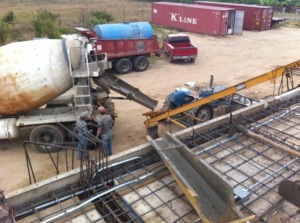 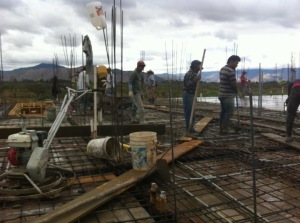 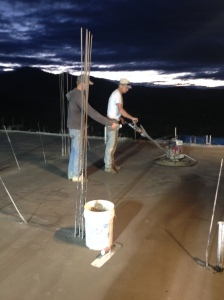 And then when the cement was all poured, it had to be worked so as to have a smooth floor.  This photo was taken at 8PM – still on the roof.

The hospital as seen from the air.  Before and after the pour.