Nate Saint on the day he was killed.

In part living in a foreign country doesn’t seem that foreign to me.  When I was younger I loved to read and buried my nose in books on travel, adventure, other cultures, and different time periods.  I loved exploration and thought the ideal life was that of the Boxcar children.  Part of my personality is to identify with the characters in the story almost to the point that I feel as if I am there.   When the anaconda emerged from the river in the Swiss Family Robinson, I got an adrenaline rush from reading about the escape and dreamt about it for nights.  And that same feeling still flows through me as I read stories of places people have been and experiences they have had.  Since I have read much about cultures and life as it is in Guatemala, I often have that feeling like I have already been here.

In the last ten years I have particularly enjoyed books by Elizabeth Elliot.  She doesn’t write many adventure stories, but focuses more on challenging me in my own life.  Her husband was one of the men killed in Ecuador along with four other missionaries by the Huaorani tribe as they were trying to befriend them.  Their lives were not in vain though as many have come to hear and know their story over the years.  Jim Elliot’s journals have been published and I can remember the first time reading  “He is no fool who gives what he cannot keep to gain that which he cannot lose.”  Immediately I felt like this man was my friend as those words were how I felt as well;  I just hadn’t put it that simply in my mind.

Nate Saint was one of the other men on this trip and was survived by a son, Steve Saint.  Steve remained in Ecuador after his father’s death and actually befriended the men that killed his father.  Their reconciliation and story was recorded in the book (and movie) The End of the Spear.  Once I read all that Elizabeth had written, I moved onto Steve as he wrote about his life and experiences.  I grew to respect him so much for his willingness to serve and love the people that had killed his father and changed his life forever!

And so you can imagine how enthralled I was when I was sitting in the second row of a seminar at the conference and Steve Saint arose to speak.  I was like meeting a childhood hero!  If I told you a year ago he almost died as he was working on a plane and was hit by a beam knocking him unconscious, shattering his vertebrae, doing irreversible damage to his arms and legs, and leaving him unable to talk, swallow, or breathe on his own, you may never have guessed this was the same man.  He struggled to walk and his shoulders and arms had little range of motion, but his mind was there along with his sense of humor. 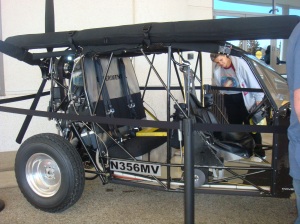 A project Steve was working on when he was hit with the beam.  This is a flying car that can be used on dirt run strips.

He spoke about the fact as Americans our response is always to jump in before we’re really needed.  We want to help others and sometimes in doing this we rob others of the opportunity of experiencing it for themselves.  As Steve was sitting down on stage he missed the edge of the chair and fell to the floor.  There were several people that went to the stage to help him up.  As they reached for him he said, “No, I can do it.  Let me do it.”  It was an obvious struggle as he could not use his arms and his legs were weak.  He had to rock back and forth as well as push himself up.  He also joked, “It’s just like you Americans always being quick to jump to the rescue.”  When he got into his chair after much struggle he was able to stand and then encouraged us by saying that he did all of that as an illustration.  Really what he wanted us to know and see is that we often do for people what they can do for themselves.  We just need to give them the chance.  Often God calls them to do things that may be challenging, but it is their own obstacle and use stepping in is robbing them of that challenge.

This is a message I have been hearing a lot and challenging me.  It has been frustrating at times as I see things that could be done “better” or “differently” and think that our Western way of thinking would be more productive and help more.  But the truth is that my role is to help others and equip others to think outside of the box for themselves.  I need to allow them to see what God has in store for them instead of seeing with my own eyes.  And so as things progress, as we continue to be led, continue to grow, it’s my hope for the valley in which we live that others would be challenged as well and see this challenge for what it really is!

If you would like to see more about Steve’s journey and what he is currently doing, check out this website http://www.itecusa.org/